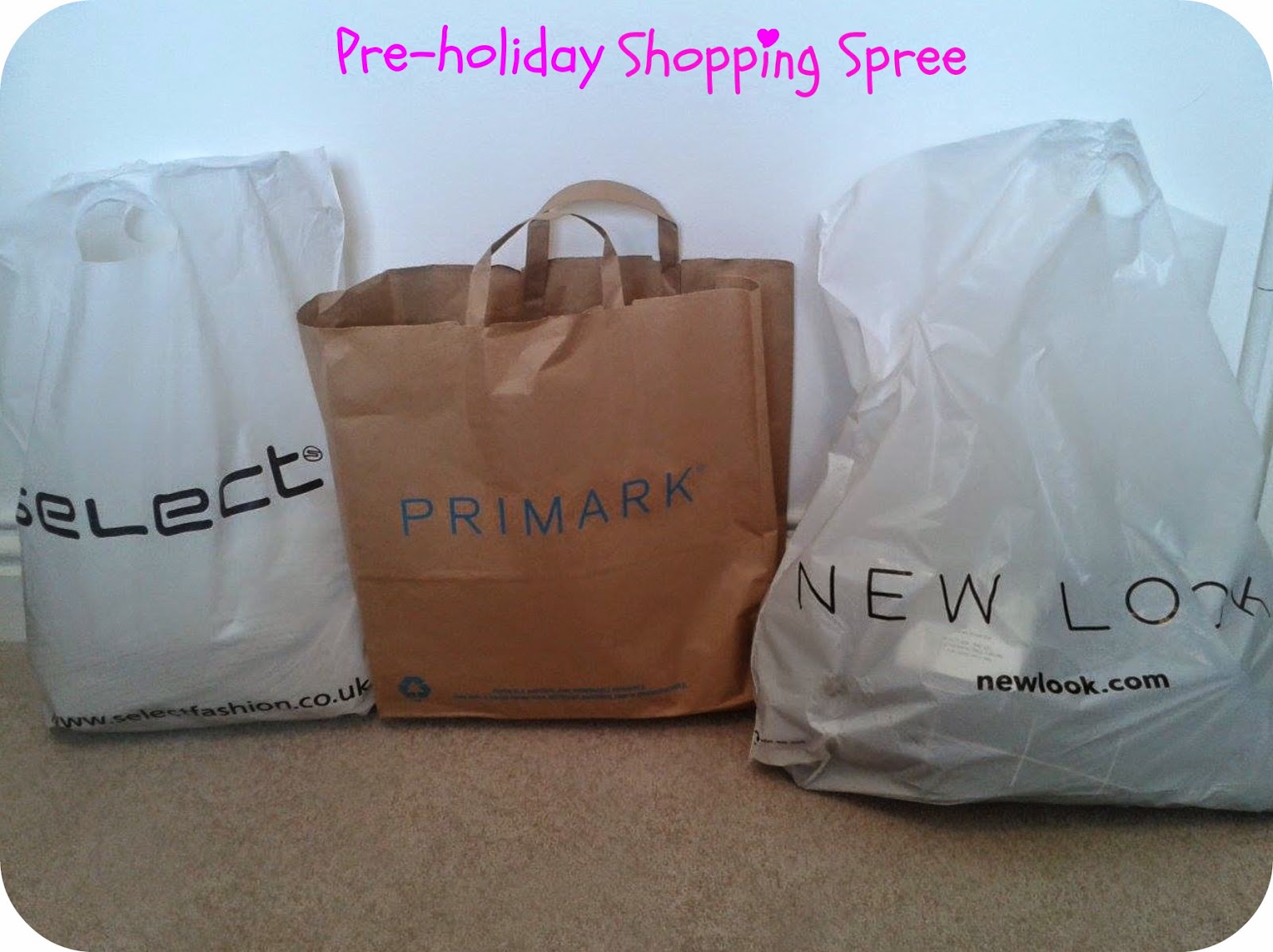 I hope you've all been good. Events in my life have been all over the place as of late, but there is one thing I am really looking forward to that's coming up - going on holiday to Spain next weekend for 8 days! I didn't have a holiday in the summer, so it's great that I do get the chance in October! Anyway, I was in town today so it was a great opportunity for some holiday clothing purchases! Of course Spain is usually hot but we're going in October which is a tad unpredictable... so I got things from a jumper to a dress! New Look, Select and Primark were the stores I decided to visit. So, without further ado... 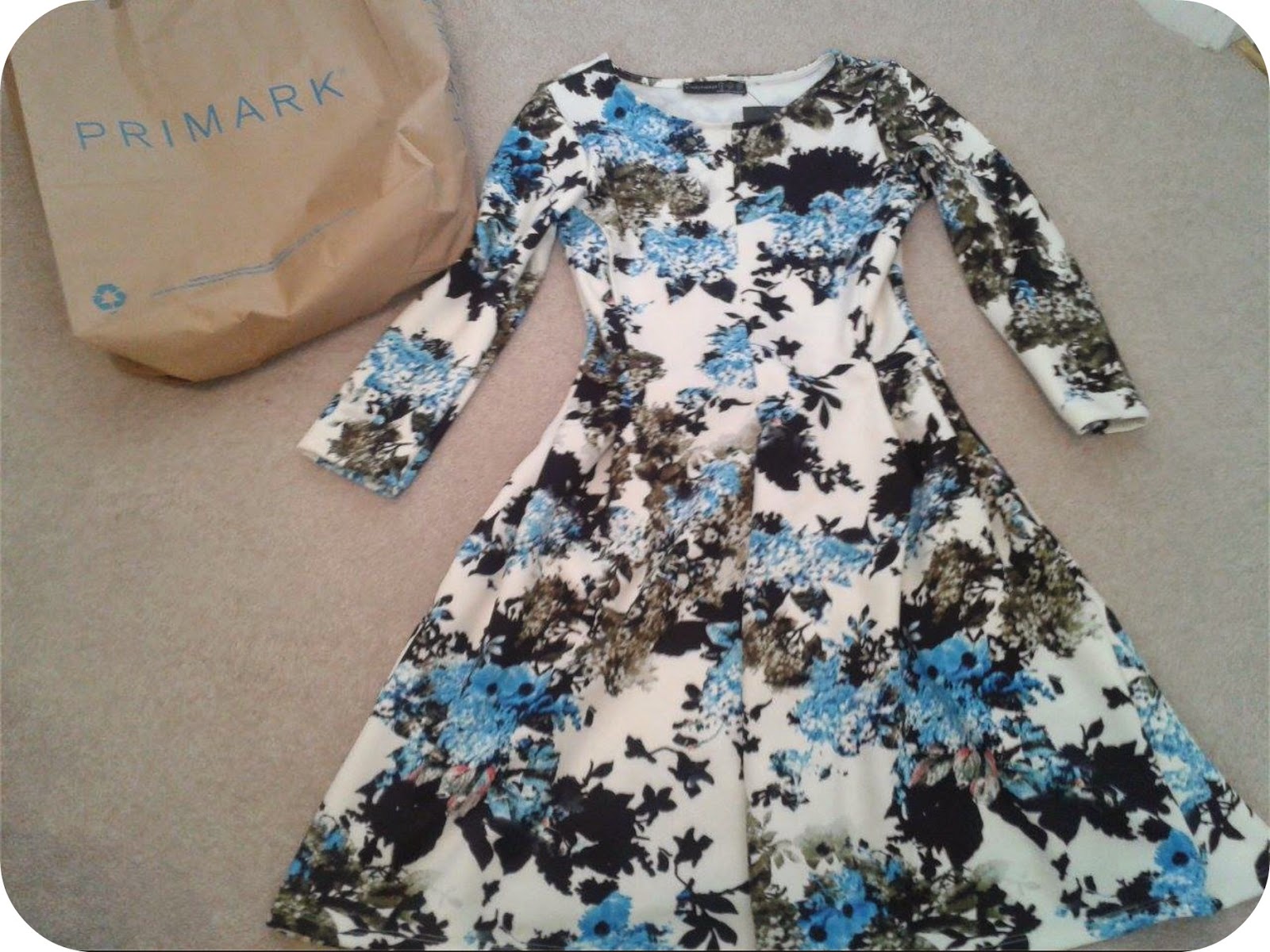 Primark was first up! I had a bit of a browse before falling in love with this dress! The picture doesn't really do it much justice, I had to get a small size because with dresses and jumpers in particular, they usually swamp me. But I assure you, in real life it looked great on and off! It is the Atmosphere ivory print scuba skater dress and it costed me £13.99. Oh Primark how I love your prices. The patterns and colouring are fantastic and it is SO figure hugging, one of my favourite dress purchases of recent times. 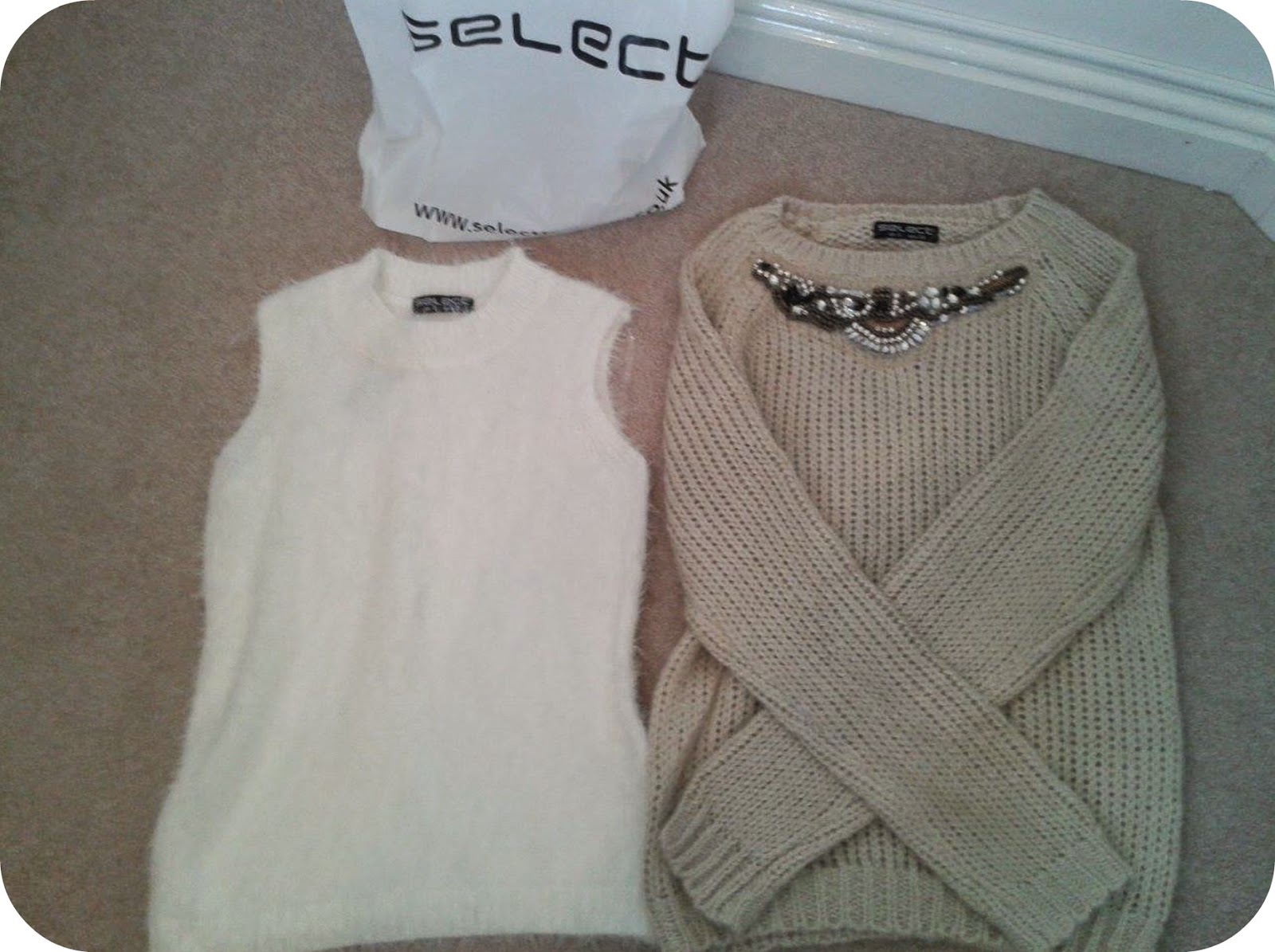 Next was Select, another shop with very affordable prices (yes, this pattern has already emerged). Firstly, I spotted the white sleeveless eyelash jumper for £11.99 and fell in love! Even if more of a winter colour, I'm really into fluffy white clothing at the moment after purchasing a Mickey Mouse jumper a couple of months ago. It's SO comfortable and warm, and I liked the fact that it was sleeveless - meaning that with the unpredictable weather right now, who knows if it'll be hot or cold - I have no sleeves for the former, or a thick material if the latter case. I was also DELIGHTED to find the Stone baroque embellished jumper for £14.99! I'd been dying to find a jumper this colour and this was the best one I came across in the store! Once again so comfortable, and also meaning I can ditch a necklace when wearing, due to the statement array of beads and sequins sewed on the front, gorgeous! 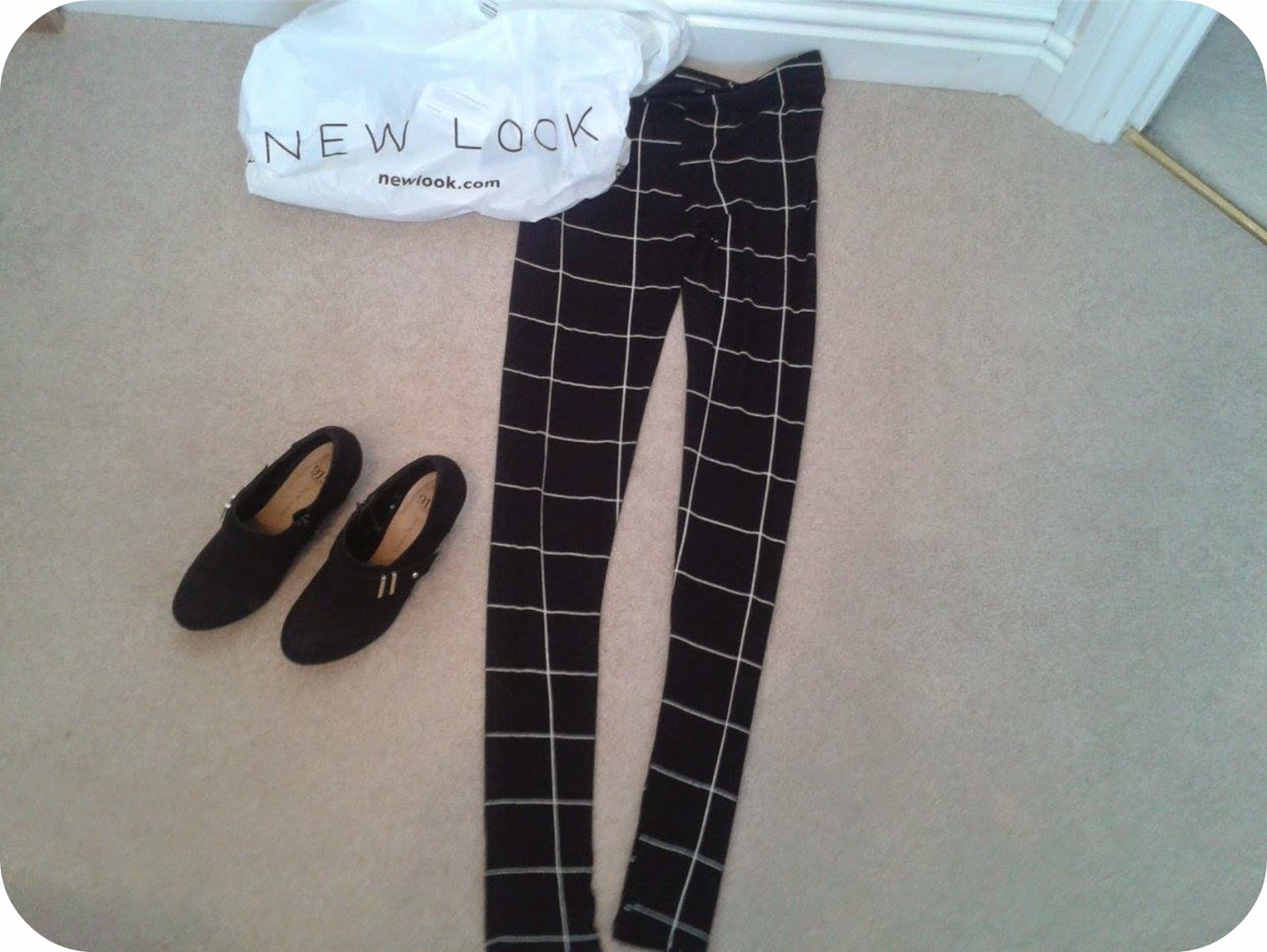 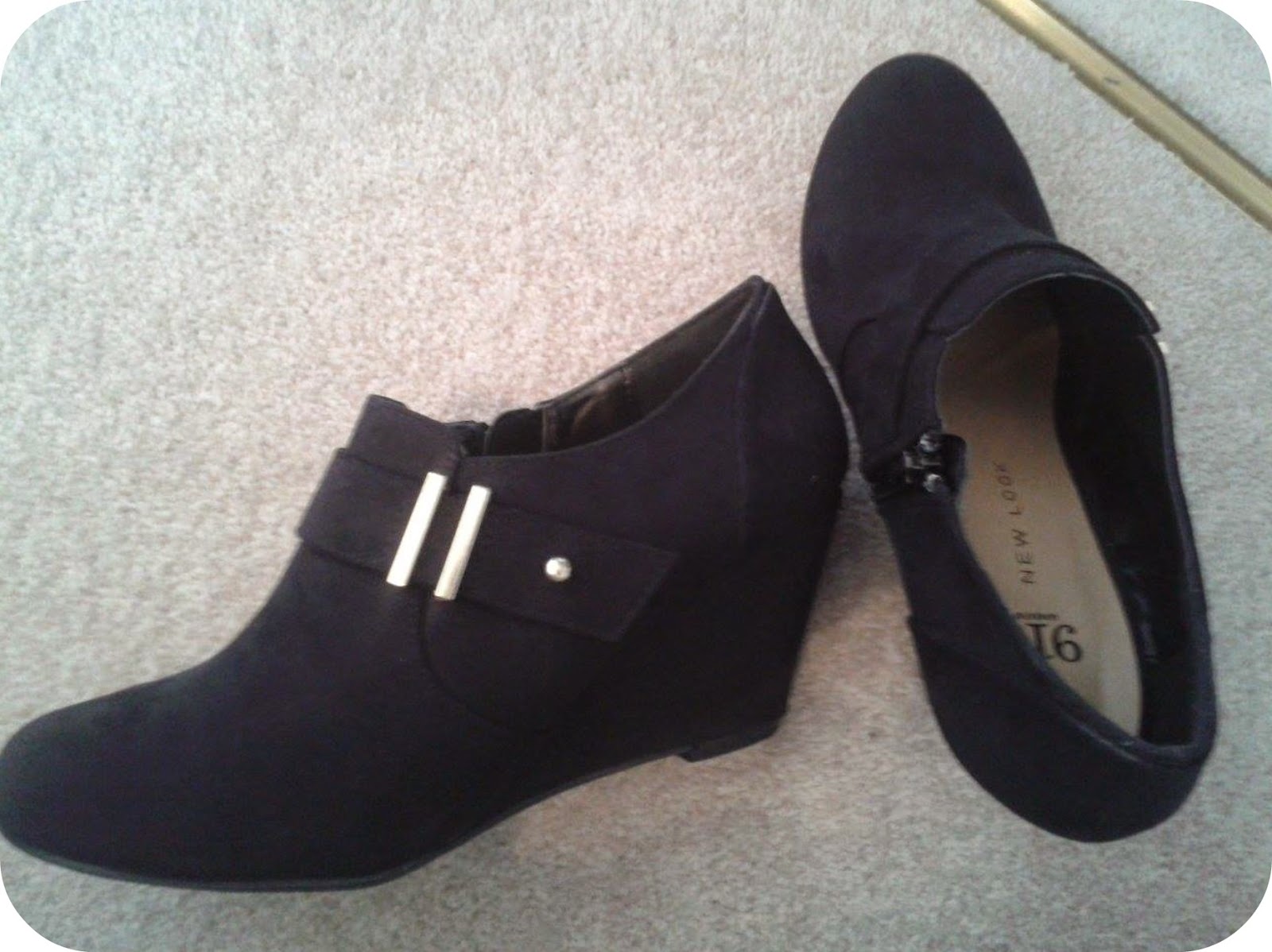 Lastly was a trip to old faithful New Look! Originally I'd spotted a t-shirt I'd wanted (a black version of a pink collar sleeveless shirt that I already own) but annoyingly it wasn't in my size! Oh well, I still managed to find a couple of other things to wear for night-time on holiday! First up I found the black grid check leggings for £12.99. Leggings is a department in my wardrobe that is pretty lacklustre, and due to an obsession with monochrome, these minimalistic but lovely leggings were the ones I ended up with! I also knew that I definitely needed a new pair of shoes. It was a tricky task though, particularly being surrounded by scarily high heels that would be laughable if I even attempted to walk in them. So I eventually settled on these - Teens Black Metal Trim Strap Wedge Shoe Boots for just £19.99! Wedges are just IDEAL for someone like me who needs a bit of height but isn't the biggest fan of skyscraper heels. These ones are quite comfortable and I adore the design.

So, that's all this time! I cannot wait for the pure escapism and joy of holiday (although it does mean missing a Halloween house party - why must plans always clash!) and now I have a few more items to take with me to Spain. I will so be making the most of their culture donning New Look clothing and eating at McDonalds... oops. But yeah so so excited! Hope you guys enjoyed this, any recent clothing purchases of your own? or any of mine that you're quite liking? Thank you for reading as always!

p.s. no blog post this week due to being in Spain so will do two within the two days I get back if that is okay!
Posted by Unknown at 10:06 12 comments: 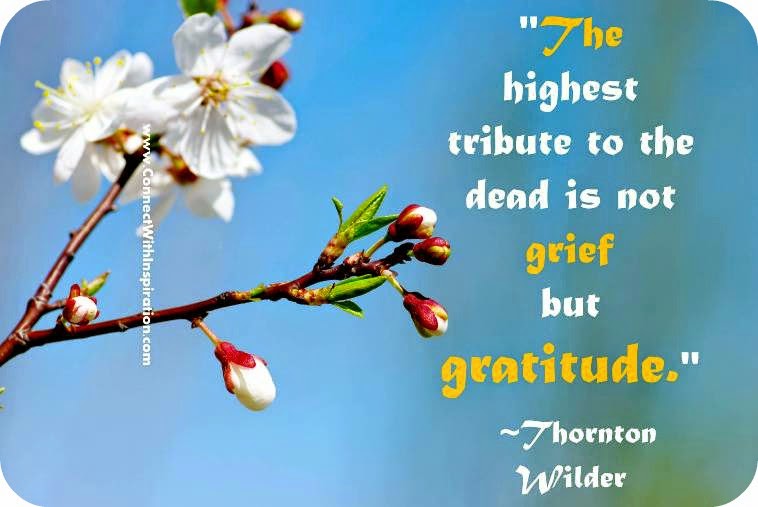 So, I was planning on making this week's blog post about either 'Impending thoughts on Uni' or 'What's on My Phone' but then I was hit with some unexpected news yesterday, and it didn't feel right to dedicate this week's post to anything else.

Unfortunately, my great grandad passed away yesterday. Not only was it devastating, but also confusing as on my seventeen years on the planet, not once have I experienced a death in the family. The worst thing about this is that it came so suddenly - I only knew the extent of what he was going through since the day before, so not one part of me was expecting to find out this news when I got home from what had been a reasonably good day at school.

I'm not all that familiar with the grieving process, so I don't quite know how to cope, I feel guilty for not thinking about it for a minute, yet slump back into sadness when I do think about it for too long. Yet it's watching my dad cry also who properly grew up with him that gets me the worst.

Anyway, how on earth does one grieve? I don't quite know what to do because it doesn't even feel real. I guess what is best to do is summed up with the quote above that I'm particularly fond of, to look back with gratitude. He made it to 91 years which is an extraordinary lifetime, and he was an extremely generous and hilarious man. I love the fact that he had an extensive record collection too, I'd look in awe when looking around. I'm blessed to have had him in my life, and will always remember how genuinely grateful he was just for the call when phoning him up on my birthday. I only ever have fond memories of him in my lifetime. 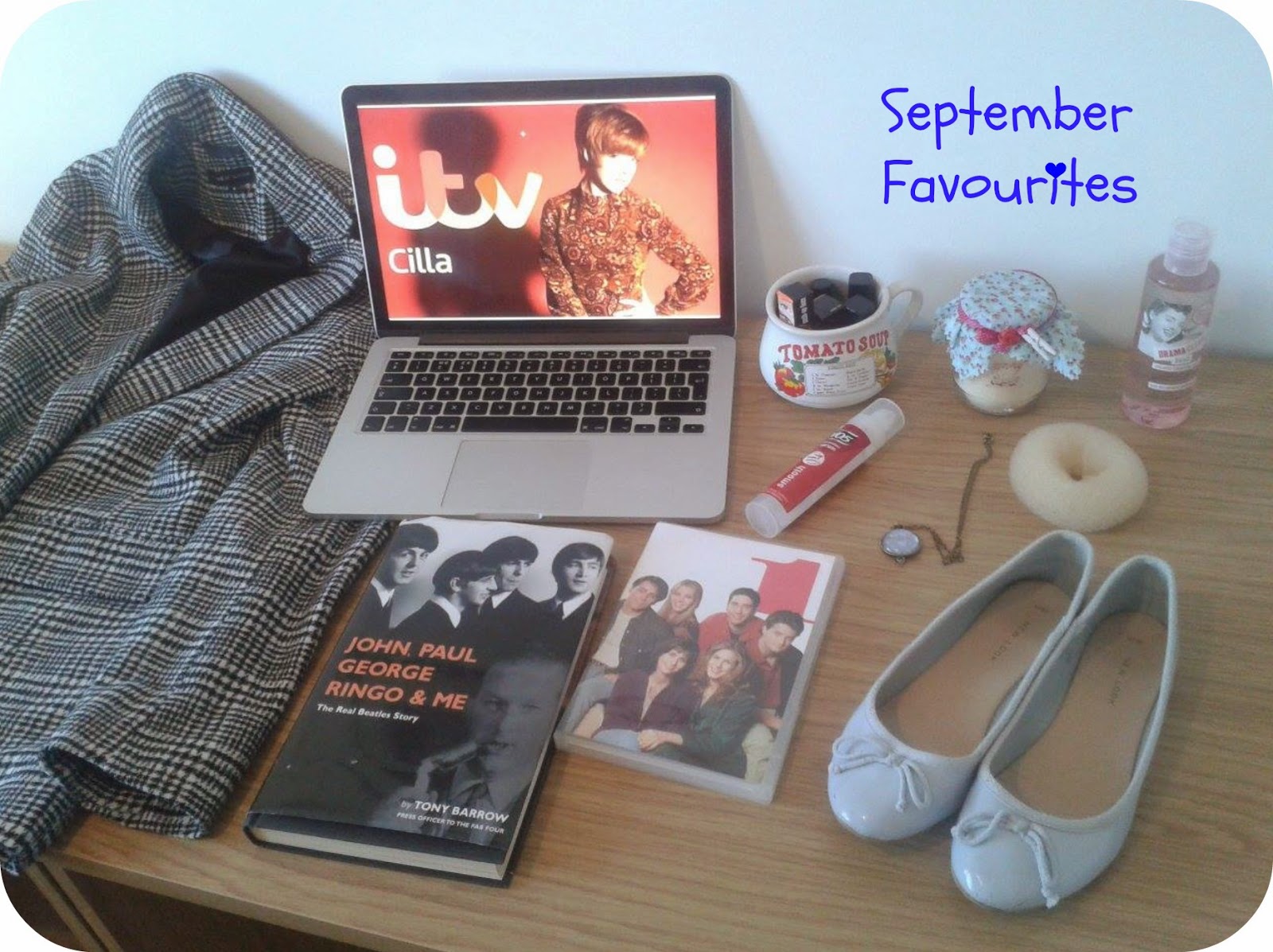 Apologies for a bit of a delay with this post as I usually do monthly favourites promptly for the next day, but I've been off school ill for most of the week (great start to the month..!) and usually I like to stick to deadlines, so with the deadline already gone I was getting a bit sloppy. However, I then decided I might as well do it this morning! Apologies for a lack of beauty things here, I've mostly been sticking to my usuals as I haven't purchased an awful lot this month. So, here we go: 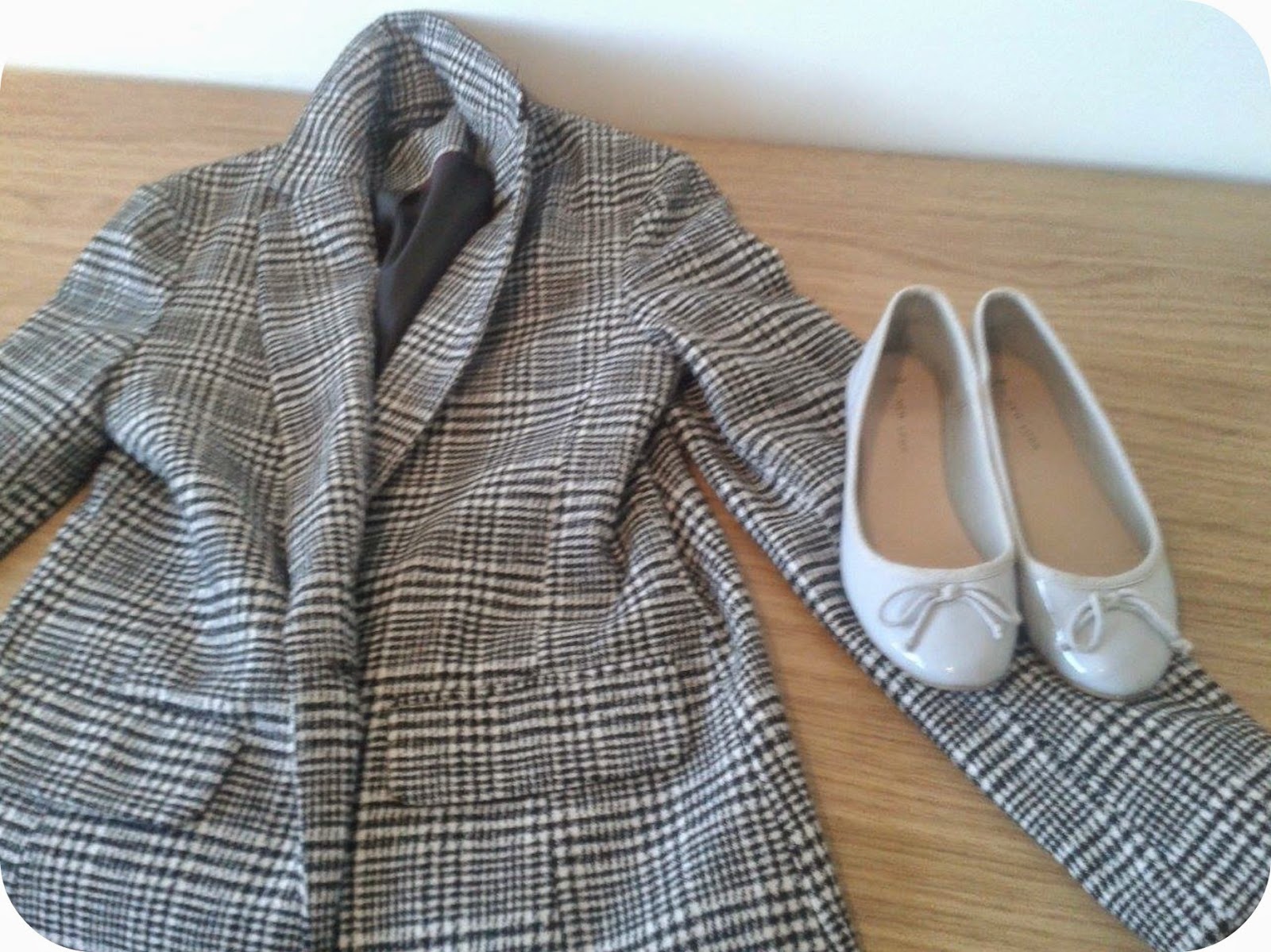 So first up are these two clothing-related items! I posted a couple of weeks ago about my New Look haul that I ended up doing while in my hometown Watford for my dad's 40th, and these were the two items that I've really been loving and just generally making the most out of this month! So, on the left is the Heritage Check Blazer which had the price tag of £34.99 and I've absolutely been loving it, very handy as it's beginning to get colder during the Autumnal period. On the right are the pastel blue pumps which were considerably cheaper at £7.99. I'm a sucker for pastel colours and they're so comfortable, also! 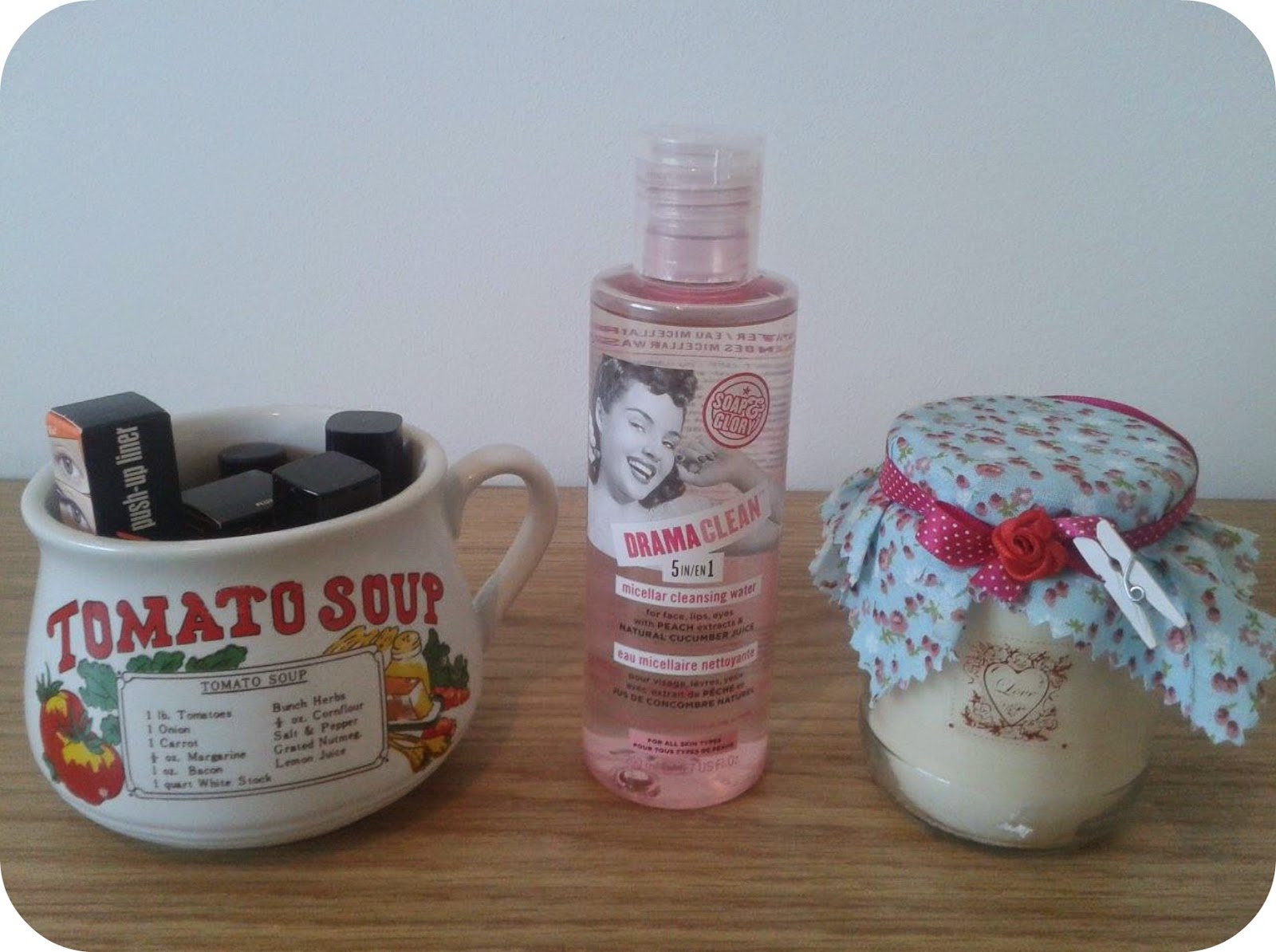 Next up I thought I'd do a bit of a section of my favourite Most Marvellous purchases/generally retro things. On the left there is a Tomato Soup mug that I found in a charity shop and it looks so unique and bright amongst the other clutter on my desk! I've been using it to store my favourite nail polishes/other small items like my Benefit They're Real eyeliner. So yes I'm loving that! Next to that is the rather vintage packaging from Soap & Glory! This is the Drama Clean 5 in 1 Micellar Cleansing Water which I picked up for £6.00 in Boots. After seeing bloggers raving about cleansing water I decided to try it out for myself and it worked like a charm - not only removing my make-up but excess dirt in the skin too, great stuff with uber cute packaging. Lastly there on the right is the candle I purchased at local retro/generally cute stuff shop Most Marvellous. It's a Hot Chocolate scented Charming candle that was also £6.00 and looks so lovely on my desk. 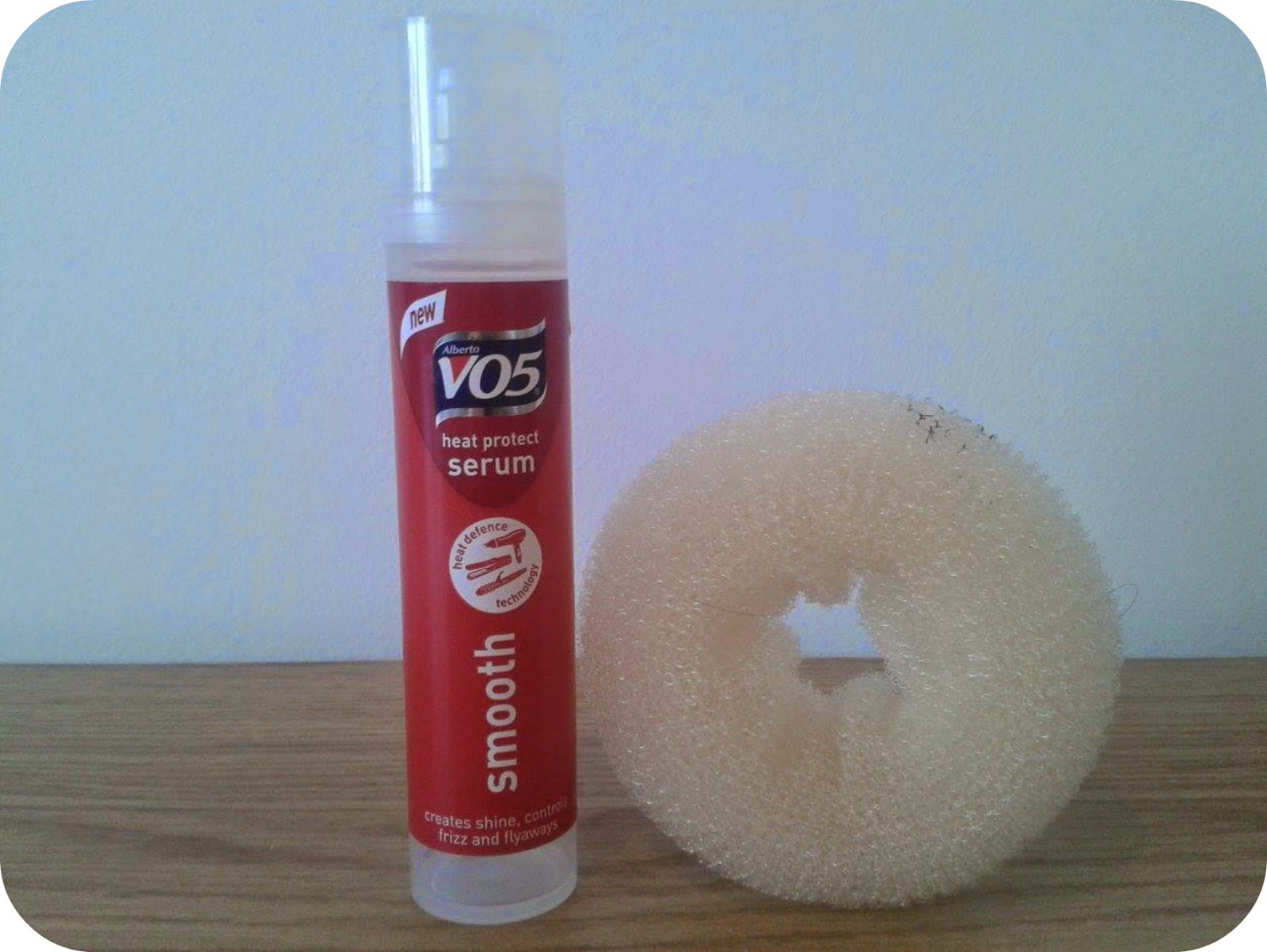 So this is the more haircare stuff! As a girl who dries and straightens her hair regularly due to having naturally curly/frizzy hair, a heat protection product is obviously a must. However, I usually use a spray, but this month I've been using this instead, which doubles up as a serum. It's the Vo5 heat protect serum which promises to create shine and control frizz, as well as of course protecting hair which is essential. Apparently Vo5 is also the U.K's number 1 Styling Brand so that's a bonus! This is the 50ml version which is £4.19 from Boots and I'd highly recommend! Also on the right there is a hair doughnut which I've experimented with a bit this month after loving the way Linda from Eastenders does her hair, so you wrap your hair around it and it produces a doughnut shape. A couple of clips later to hold it in place, and it actually worked! You can get them dead cheap, I think it was only £1. 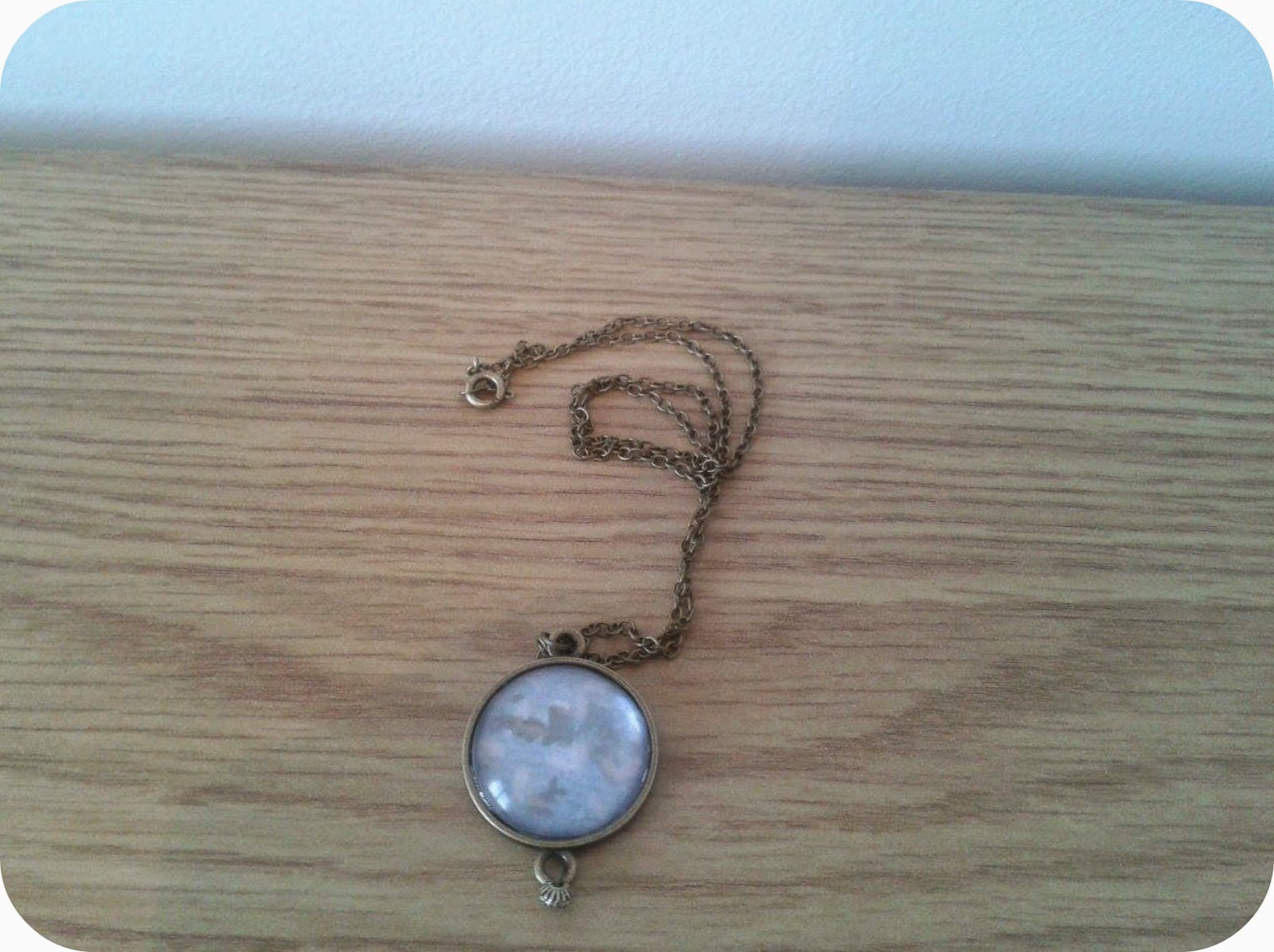 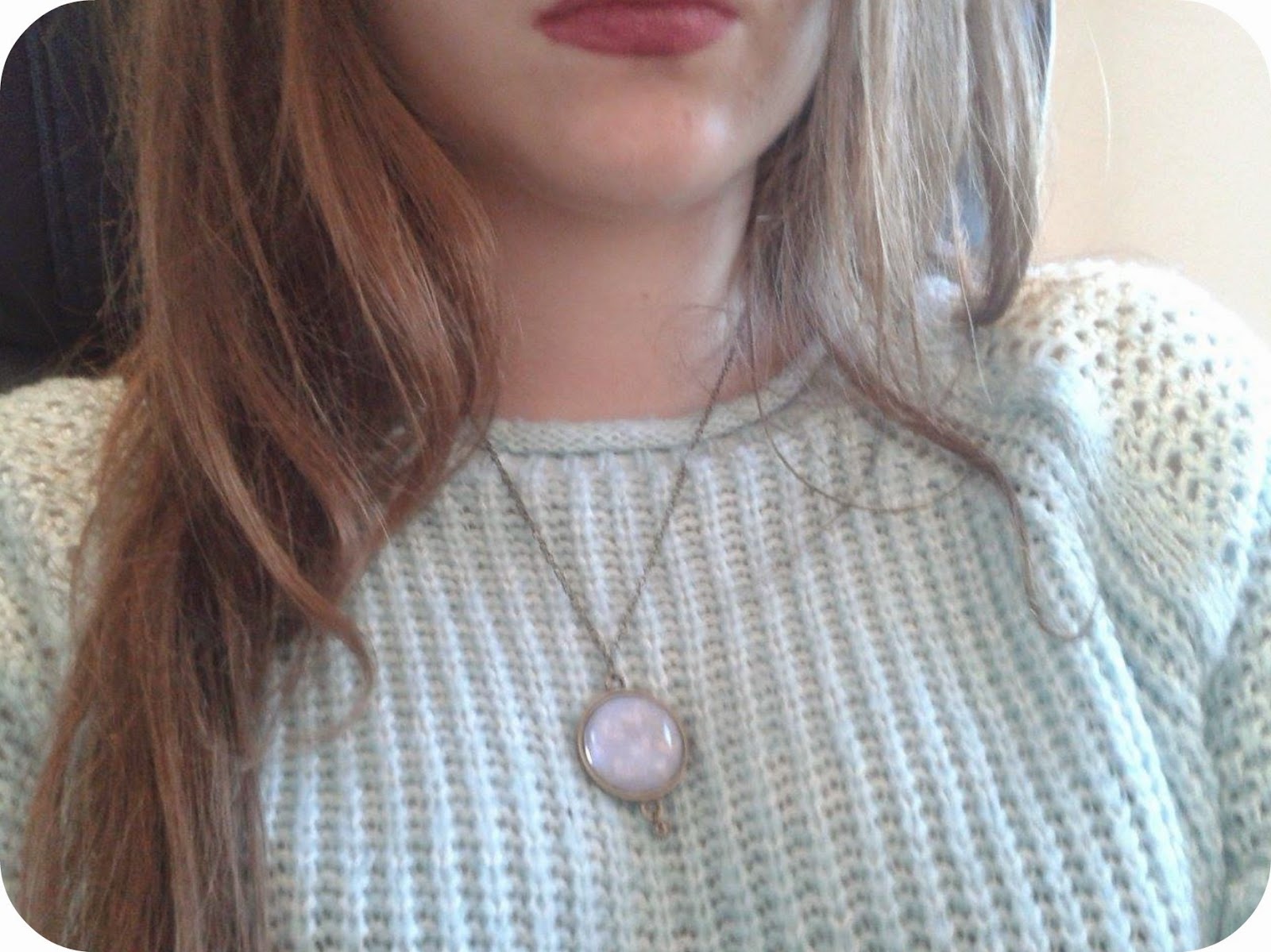 Next here is a new necklace I decided to purchase from Most Marvellous for £5.00! I absolutely love the design of the necklace what with the bronze chain and circle with the glass dome around the image of a purple/blue pattern. There was a selection of others with quite flowery ones (a bit TOO granny even for me!!) and really random ones like Captain Africa (Yep, not America) and this was my favourite so now I have another necklace to add to my rather small collection. 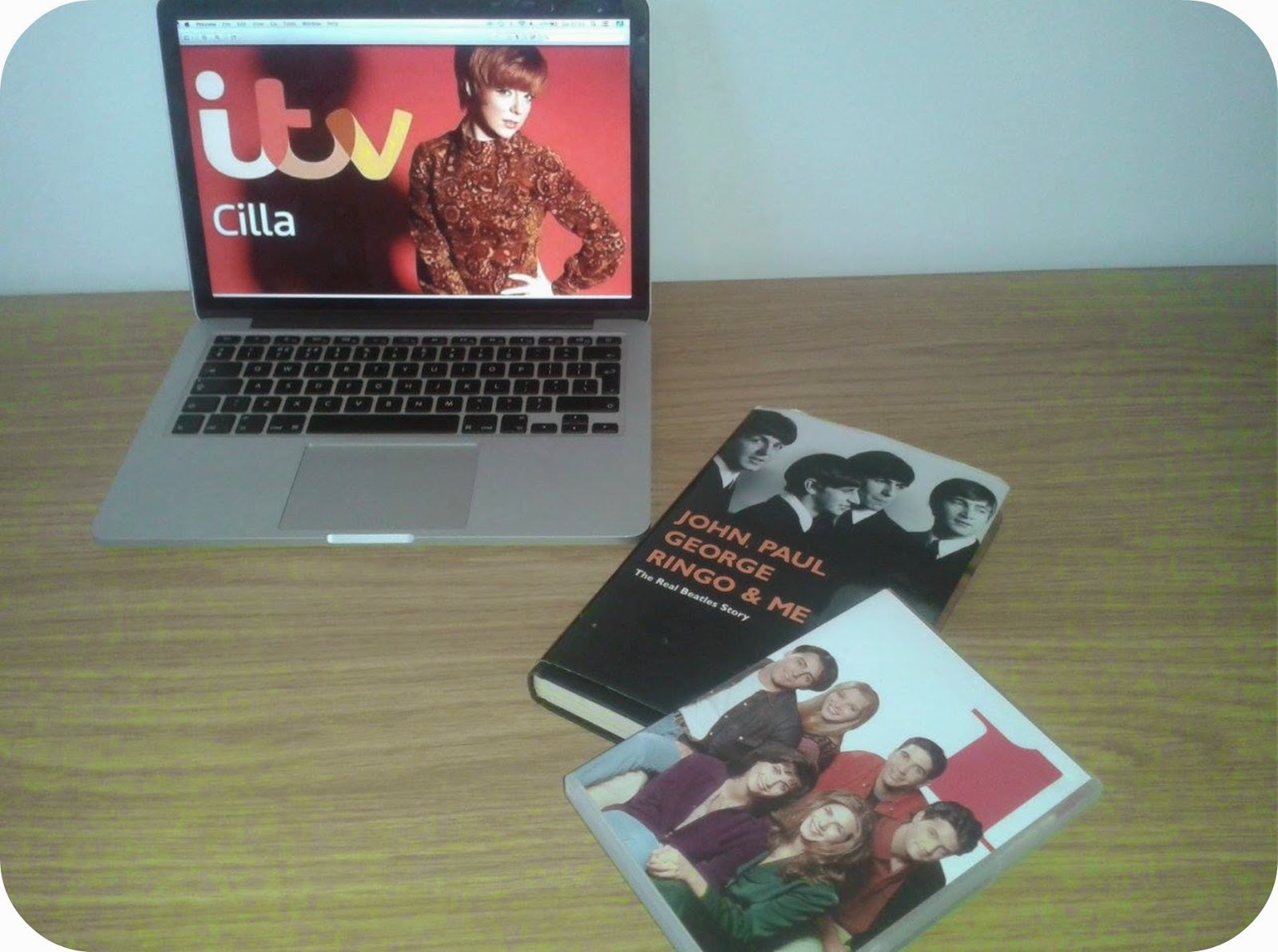 Last up is the entertainment I've been loving this month! First up was the sublime three-part drama series called 'Cilla' that was on ITV. It re-created the first couple of years of Cilla Black's career taking off, with Sheridan Smith OWNING the title role. Her rendition of 'Anyone Who Had a Heart' is stellar, even better than the original - I've played it so many times! I'm gutted that it's already over (finished on Monday) but luckily ITV are bringing it out on DVD so I'll definitely be getting that! In the picture next to that is the book 'John Paul, George, Ringo & me - the Real Beatles story' that a music teacher at school has let me borrow after knowing how much I love them. It's not like every other book about them though, it's written by Tony Barrow who was their PR man up until 1968, so he saw all the action in the early days and I'm hooked so far - he's a brilliant writer. There on the right is the F.R.I.E.N.D.S season 1 DVD which I've been watching a lot this month - it was particularly welcomed while I was ill! They all look so much younger and were such different characters in the beginning, although still loveable and packed with top-quality humour since day 1.

So that's it for this month, I hope you guys enjoyed my favourites! Feel free to comment your own below and I'll happily check them out. 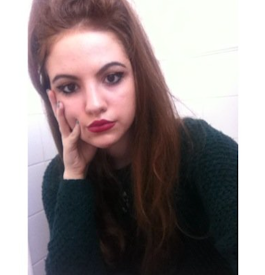 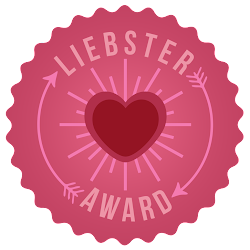